From the popular Dobos cake to the Esterhazy torte, you’re probably aware that Hungarian desserts are world-famous and delightful. But have you heard about the simple mákos retes or poppy seed strudel, beloved by families throughout the country? Hungary has cooked and baked with the humble poppy seed for centuries, dating back to the Ottoman occupation in the 17th century. Popular in countries around the world, including India and parts of the Middle East, the ingredient found a special place in the hearts in Eastern European countries with poppy seed recipes like rolls, strudels and even noodles. When you find out more about the benefits of poppy seeds, it’s no wonder that they’re a popular ingredient in Hungarian desserts. Though tiny in size, poppy seeds pack a surprisingly nutritional punch. They’re packed with antioxidants – good for health and great for the complexion. They’re also loaded with dietary fiber and essential minerals like calcium and copper. Just two tablespoons of the seeds fulfill 25 and 32 percent of your recommended daily calcium and copper intakes, respectively (Livestrong). Calcium, of course, is important for your bone health while copper is essential for keeping connective tissues strong and protects against DNA damage. Poppy seeds also contain high amounts of phosphorus and manganese, an element that produces collagen. At the Eminence Certified Organic Farm, we grow these precious seeds for our skin care products. Poppy seed pods are dried, gathered and hand-mixed into Eminence Organics Pear and Poppy Seed Microderm Polisher.

Co-founder of the Eminence Certified Organic Farm Boldijarre Koronczay looks back fondly on childhood memories of his favorite poppy seed recipes. He recalls: “When Grandma & Grandpa would come over for dinner… Grandpa would always have a big bundle of what looked like laundry held carefully in his arms… I loved to unwrap the towels, revealing a hot poppy seed strudel my grandma had just taken out of the oven.” Like the popular beigli or poppy seed roll, mákos retes or poppy seed strudel is a cherished favorite in Hungarian recipe books. We’ve adapted for you a version of Grandma Koronczay’s poppy seed strudel recipe – bake this family favorite and try it yourself, hot out of the oven!

In a medium-sized bowl, combine the ground poppy seeds, sugar and lemon rind. Allow the mixture to meld its flavors for at least an hour, or combine the mixture the day before making the strudels. 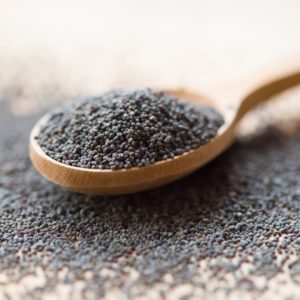 Preheat the oven to 350 degrees F

To assemble the strudels: Place a sheet of phyllo dough on a damp kitchen towel and brush it generously with melted butter. Cover with a second sheet of phyllo and brush on more butter. Continue the same process for two more sheets and additional butter to create four layers. Spread half of the poppy seed mixture in a four-inch strip along the length of the dough, leaving a two-inch border on all sides of the dough strip. Dot the poppy-seed mixture with half of the preserves.

Roll the strudel with the aid of the towel, jelly-roll fashion, starting at the long side nearest you. Tuck in the edges of the ends of the dough roll and place the strudel, seam-side down, on a buttered baking sheet. Brush generously with butter.

Repeat the process with the remaining ingredients for the second strudel.

Bake both rolls in the 350 degree F oven for 25 to 30 minutes. If the strudels appear to be browning too quickly, cover them loosely with aluminum foil. Be sure to remove the foil 10 minutes before the total cooking time has elapsed to allow browning. Remove strudels from oven and allow them to cool somewhat before dusting them with confectioners’ sugar. Serve warm.